Mr. Shannon perfectly described the communication technology with mathematics, pointed out the development path, and also gave the boundary conditions. Until 5G, we have turned formulas into systems within his definition, symbols into signals, and dreams into reality. The dream of 5G is "information comes at your fingertips, everything is at your fingertips", which not only continues the characteristics of high-speed transmission before, but also takes object connection as its mission. To this end, 5G has prepared three scenarios, eMMB, mMTC and uRLLC; 5G has also applied the latest technological achievements in recent years, such as large-scale antenna arrays, polarization codes, etc.; 5G has also opened up new battlefields, such as millimeter wave bands; 5G also introduces new concepts such as slicing technology and edge computing. All these efforts are made to allow endless dreams to be supported by the constantly fullness of reality. 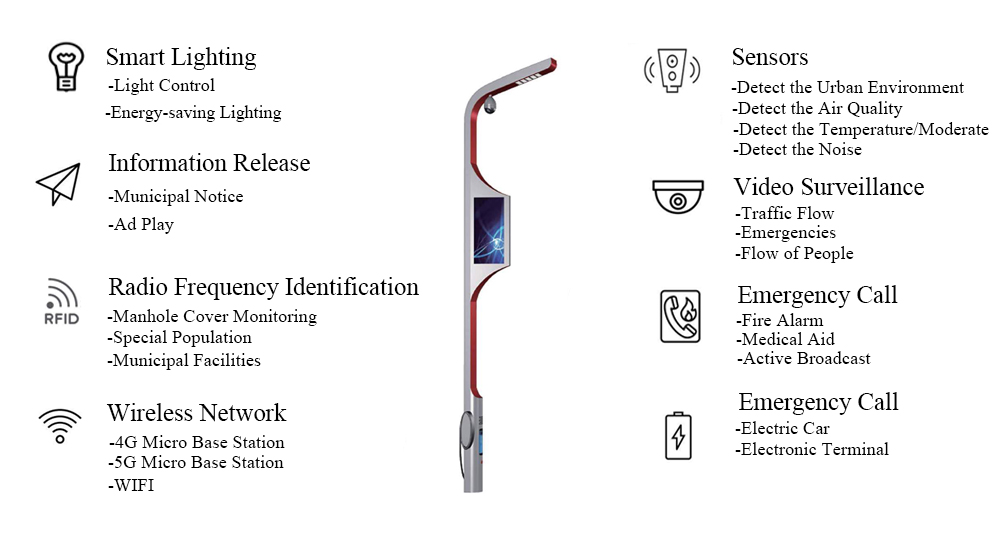 5G base stations have the need to use high frequency communication and support large capacity and high speed, so a large number of tiny base stations are required to complete denser network coverage. Seeking joint construction of base stations is an idea for 5G new base stations.

As a homogeneous urban infrastructure, light poles are very popular. A multi-purpose smart light pole not only saves energy, but also reduces the occupation of urban land and promotes efficient use of resources. At the same time, in some cities, street smart light poles also have functions such as weather stations, air quality monitoring stations, etc. Environmental protection needs. If smart speakers are becoming an entrance to a family's smart life, smart light poles may become an important entrance and node of a new generation of urban information infrastructure.

At this stage, 5G base stations are difficult to popularize, mainly due to problems such as large power consumption, high base station density on site requirements, and excessive base stations. In response to these problems, the emergence of smart light poles is undoubtedly a savior. In recent years, local governments have also issued relevant policies and plans to support the investment in the construction of smart light poles to achieve "multiple poles in one". The demand for 5G micro base stations has gradually become clear, and smart light poles have caught up with the trend.

In 2015, AT&T and General Electric jointly installed cameras, microphones, and sensors for 3,200 street lights in San Diego, California, enabling them to find parking spaces and detect gunshots; Los Angeles introduced acoustic sensors for street lights And environmental noise monitoring sensors to detect vehicle collision events and directly notify emergency departments. Subsequently, many countries around the world began to pay attention to the reuse of street lighting facilities. In 2016, China's smart street light poles were also piloted in many provinces, cities and regions, but progress was slow from 2017 to 2018, mainly due to the unclear profit model and unclear operation ownership authority.

In April 2019, China promulgated the "Implementation Opinions on Promoting the Co-construction and Sharing of Telecommunications Infrastructure in 2019", stating that "to encourage basic telecommunications companies and tower companies to intensively use existing base station sites, street lamp poles, monitoring poles and other public facilities, Reserve 5G site resources in advance". With the issuance of 5G commercial licenses, smart light pole solutions for the construction of 5G base stations have been pushed to the foreground again.

On August 8, 2019, Guangdong Province of China issued the "Technical Specifications for Smart Light Pole", which stipulated the design, construction, inspection and acceptance, operation and maintenance of the smart light pole system. This is the first provincial level in the country. 5G smart light pole standard".

Currently, Huawei and Nokia have launched smart light pole base stations. For example, Huawei has launched a smart light pole solution-PoleStar 2.0, which supports 5G mobile communications, smart lighting, smart surveillance, the Internet of Things, the Internet of Vehicles, smart environmental protection, and urban information publishing. In addition, China Tower has also carried out the construction of 5G light pole base stations. China Tower Chairman Tong Jilu said at the financial report meeting on August 7, 2019 that he has received 65,000 5G (base station) construction needs from operators. “This year’s construction is mainly achieved through the transformation of existing towers. It is estimated that we will receive a construction demand of 100,000 throughout the year. With the larger-scale layout of 5G, there will definitely be more new builds. The revenue contribution of 5G is a Gradually increasing process".

Although under the promotion of the government, the light pole base station will improve to a certain extent, but the core dominance, benefit, and operation issues are still unresolved. The light pole base station involves different fields such as municipal administration, meteorology, transportation, urban construction, advertising management, etc., which belong to different national institutions and administrative departments, and it is still necessary to continue to explore new models.